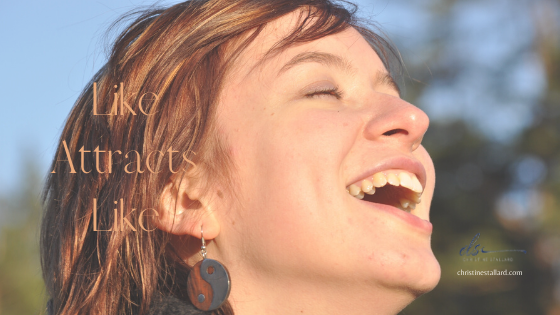 Now that everyone is raising their vibrational frequency, here’s the second installment on navigating and managing change.

The universal law I want to talk about in this blog is the one most recognized today and the one that holds the Universe together according to some. The Law of Attraction states that from the words you speak to the beliefs you have, you attract everything in your life through energy. It’s based on the laws of attractive and repulsive force. Like attracts like, so whether it’s negative or positive, everything you have in your life is what you’ve attracted.

And, that includes the people you’ve attracted because they have the same energy frequency as you. Sort of like birds of a feather, flock together. Think about it.

So, according to leading authors on this topic, the Law of Attraction has always been in existence and its concepts rooted in some religious beliefs. Buddha said, “All that we are is the result of what we have thought. The mind is everything. What we think we become.” And, in the Bible, Galatians 5:6, we see a similar thought. “Whatsoever a man soweth, that shall he also reap.” And again in Matthew 21:22, “And all things, whatsoever ye shall ask in prayer, believing, ye shall receive.”

The ancient Greeks knew from the observation of magnetics that opposites attract and likes repel. Yep, that’s right; the laws of attractive and repulsive force.

The Law of Attraction became more popular and influential a century later when Jerry and Esther Hicks rose to prominence in their nine books where they professed to channel messages from non-physical beings. These books, collectively called The Teachings Of Abraham explain how the Law of Attraction works.

Now, I don’t know about you, but that sounded a bit like voodoo to me. Channeling messages from nonphysical beings? I often say my Bouvier puppy is channeling messages and actions that my other, now departed Bouviers used to display. One of my favorites is when she knows you’re about to peel a banana and she comes running from any room in the house for her bite. That’s when she’s channeling Jacmel. Miss that boy. When she’s chasing deer or her prey drive is in overdrive, she’s channeling Kaya who was hell on wheels when it came to gophers or deer. Miss that diva.

So, yes, I believe in channeling. That shit is real in my world.

Rhonda Bryne’s documentary film and subsequent book The Secret brought the Law of Attraction front and center to a worldwide audience in 2006. Through leading scientists, authors, doctors and philosophers, Bryne shared knowledge on how to intentionally create a life of everything you’ve ever wanted, including joy, abundance, well-being, peace and love. Interestingly enough, the film stresses that learning new ways of thinking, recognizing and curbing negative thoughts and setting goals are all key to getting what you really want.

Remember what I said about thoughts, feelings and emotions? The lowest point on the emotional scale is fear, grief and pessimism. Doubt, worry and limiting beliefs are at the midrange. Sound familiar? Just switch on the nightly news if you’re wondering why so many are stuck in the middle or at the bottom of the vibrational ladder. So, if something doesn’t feel good, that’s an indication that you need to turn that around to a more positive thought so you can move yourself up the vibrational ladder. Because when you’re feeling joy and peace, when you’re hopeful and when you’re full of love, you’re at a higher vibration and you’ll be in a position to attract more of the same.

Understanding that is essential to living a life filled with joy, happiness, passion and purpose. I believe most of us are seeking those things in life. John Lennon once said, “When I was 5 years old, my mother always told me that happiness was the key to life. When I went to school, they asked me what I wanted to be when I grew up. I wrote down ‘happy’. They told me I didn’t understand the assignment, and I told them they didn’t understand life.”

So, try to elevate your thoughts to those of joy and happiness, and while you’re at it, add in thoughts and feelings of confidence, peace and hope. Choose faith over fear. All this will move you up on the vibrational frequency ladder. There, you can intentionally create and attract what you want. You can focus on the positive instead of cluttering your mind with — and attracting — all those things that just bring you down. And that doesn’t just include everything that has gone wrong, it also includes worrying about what could go wrong.

Remember, like attracts like. Don’t let the negative breed more negative and drop you right back to that bottom rung. And, for Heavens sake, don’t worry about tomorrow because that’s a waste of your time. Adjust your thoughts and feelings, think positively about the future and you’ll have the ability to adjust your outcome.

Next up? A deeper dive into the power of your thoughts, feelings and emotions.