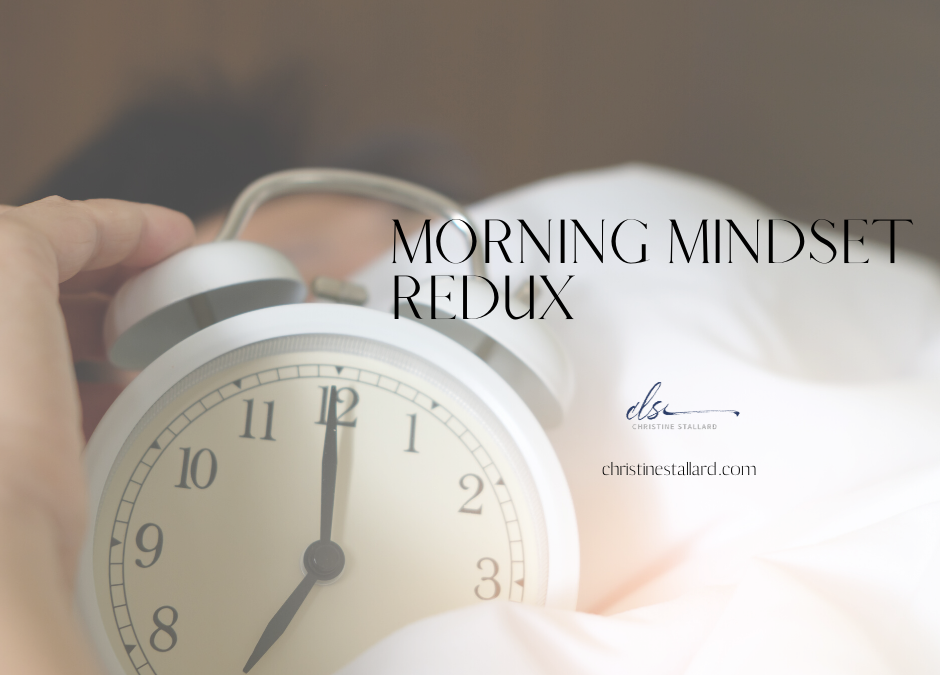 Did you ever read John Updike’s Rabbit series? The second book is titled, Rabbit Redux in which the character Harry “Rabbit” Angstrom is brought back for readers to check in and see what’s going on in his life a decade after the first book. I’ve always liked that word redux. Since I’m going to give you another tip on how to take control of your mindset in the morning (without making you wait a decade), we’ll just call this blog, “Morning Mindset Redux.”

You probably remember that I’m not a morning person. Apparently, this goes way back because, according to my mom, I’ve been a night owl since just about day one. My fondest story (yes, story because I don’t remember) is about being the center of attention in the middle of the card table on pinochle night. Yep, I was a “daddy’s girl” early on and apparently well into the night when most babies were fast asleep.

Over the years, and due in large part to having a traditional workday with wakeup calls ranging from 5am to 7am, the night owl in me slipped away. But, I never was and am still not a morning person.

A couple of years ago, I began to wonder why it was that even though I seemed to be getting an adequate night’s sleep, I was waking up with what I’ll call a “foggy brain.” It took me a while to figure it out, but what a difference it made when I finally did and I stopped the habit that was the underlying cause — the snooze button.

In my earlier blog post, I mentioned that waking up and taking control of your morning actually starts the night before when you put your phone out of reach so you’re not tempted to let the outside world into your brain space until you’ve been there first. This is important. Blue light impacts your ability to fall into a deep sleep. About 87% of adults sleep with their phone and 33% of adults check email in the middle of the night. Crazy, right? So, if you haven’t started to break that habit, do it now.

You see, your body needs to rest. But only half your brain rests along with your body. The other half runs your body functions, which includes storing all the memories of today. Isn’t that fascinating? Think of it as returning or adding books to the giant library system called your mind. That’s why sleep is not only important to your physical body, it is also important to your cognitive abilities.

The moment you go to sleep, you begin one of several sleep cycles that each last around 90 minutes. A couple of hours before your body starts to wake up your core temperature goes up, which makes your mind start to wake up and feel more alert and less sleepy. If you hit the snooze button for that extra 10 or 15 minutes of rest you think you’ll get, you’re really just confusing the mind and body wake up mechanisms already at play. You’re saying, “Wait, no, I’m going back to sleep.” The parts of your brain responsible for physiological functions respond rather quickly to that declaration so the half of the brain that rests with the body, falls back asleep. But the parts of the brain responsible for re-shelving the library as well as for decision making, attention, alertness and self-control can’t respond as quickly. Remember, that side of the brain works in cycles that are about 90 minutes long.

You’ve told your mind and body you’re going back to sleep. They think for another 90 minutes, but when the alarm goes off again after 10 or 15 minutes, now your brain is really confused. It’s only 10 or 15 minutes into a regular sleep cycle that is supposed to be 90 minutes! That’s why you have foggy brain, which is technically called sleep inertia. It doesn’t sound so bad except it can take up to four hours for you to clear your mind and be functioning at your best.

Just one hit on the snooze button and you’ve sabotaged your ability to start your day with an optimal mindset. You feel tired and out of sorts. Feelings of anxiety, fear and uncertainty quickly creep in. If you’re the least bit depressed you’ve just made it worse.

It’s so important in stressful and uncertain times that we take care of ourselves and each other. Accept what you can’t control and focus on what you can. You can make small changes in your habits — like never hitting that snooze button again and not sleeping with your cell phone — that will give you a sense of control. Even small changes will give you a more positive mindset.